I know I said I’d blog more often and hopefully, you’ve noticed an increase in bloggity frequence. However, I realize a few days have passed since posting some of Rachel+Sam’s photos and I just want to say—we have had one crazy week!

My parents recently hired my friend Carla, a professional organizer here in Seattle, for their house. Yes, you read correctly: PROFESSIONAL ORGANIZER. And dang, she’s good! She’s been coming over about two days out of each week to help move my dad’s office from the basement to the upstairs bedroom (my old bedroom and my current workspace) and in the process, we’ve been discovering a lot of stuff. Not just material stuff, but emotional stuff. I don’t know what it is about purging old files and going through ancient pictures, but there’s a lot of mental and even spiritual experiences that come along with it…

Anyway. We’re nearly completed with setting up the new office, but because my own “office” is included in the space being effected, it’s been difficult to get in here and work. So I apologize for these delays.

Additionally, my sister is expected to deliver a healthy baby boy on Thursday morning and we are all preparing for that exciting venture!

OH! And my dad was bitten by a cat (which may or may not have been my cat, but whatever…) and seriously… Cat Scratch Fever is for real. My parents are dog trainers and they’ve seen their share of dog bites, but after what we’ve experienced this week, we know cat bites are faaaaaaar less desirable. So if you get bit by a cat, don’t wait to have it treated. Because infections run high with this sort of thing. And it is NOT funny.

Yeah, see? Lots to deal with this week…

Of course, I won’t leave you without a photo, so check this out.

There are not a lot of things George will say he’s afraid of. And I’ll be the first to say big, fuzzy moths totally freak me out. Like, high-pitched girlie-squeal type of freak out. So when we found this guy during Rachel+Sam’s wedding and George said he was too afraid of him and needed me to do the giant insect catching—I was pretty proud of my badass-ness. 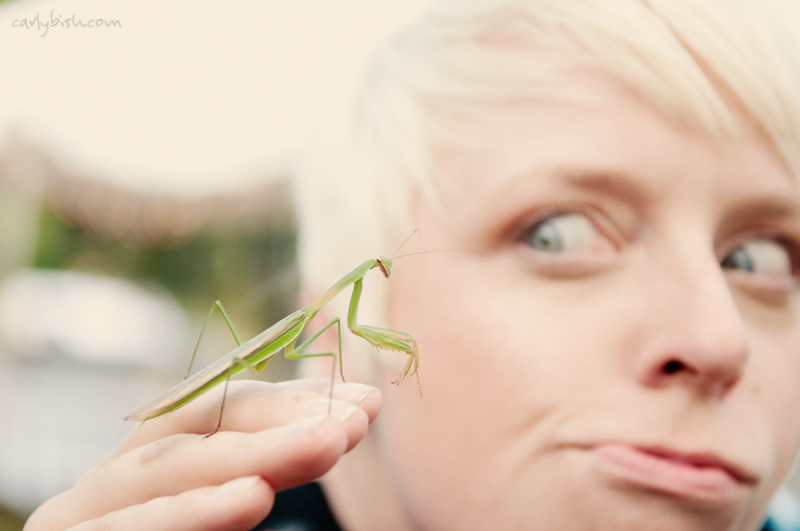