During my second year of community college, I took Cinema 201 (American Cinema). And as a result, I saw some of the best films ever made, some of which became favourites of mine. Movies like The Rope, directed by Alfred Hitchcock and Empire of the Sun, starring Christian Bale when he was just an itty boy. Had I never taken the class, I would have never seen these movies, and that’s a terrible thought.

Another movie we watched was 1962’s Manchurian Candidate, starring the young – and sexy version of – Frank Sinatra. Directed and produced by John Frankenheimer, this Cold War thriller had me captivated in the first 30 seconds. At the time it was made, gruesome images like gunshot wounds, bloody shirts, and the breaking of bones were prohibited in filmmaking. Even still, the movie formed pictures in my mind enough to make me forget to breathe. 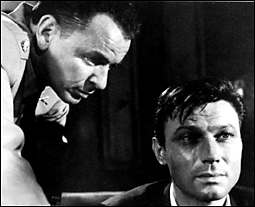 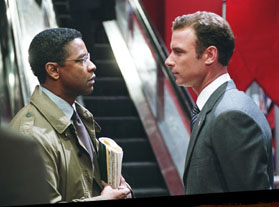 The remake of The Manchurian Candidate opens in theatres tomorrow. The only reason I’ll go to see it is because I have seen the original. If the original black-and-white version can make me gasp in terror, I can only imagine what this uncensored, contemporary version will do.

If you can go to your local movie rental store and find the original version, I highly recommend it. It will be a good prepper for when you decide to see Denzel as he desperately tries justifying his “far-fetched” paranoia.

And if you’ve seen the previews and are still struggling with the story behind the movie, Google up “Manchurian Candidate 1962” and you’ll find the basic synopsis of the original film. It will tell you generally what it’s about without giving away the end of either films or stripping them of any thrill or shock you will likely experience watching either one.

With Garden State, Manchurian Candidate, and M. Shyamalan’s newest, The Village… I feel that this is a great time for movies.